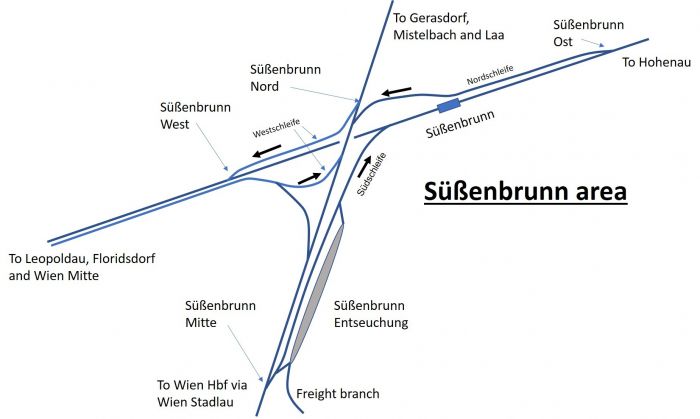 On 1 August 2020, Regiojet began operating a Praha - Wien - Budapest service with two daily train pairs via this route. Note that the next stop towards Budapest from Wien Meidling is Hegyeshalom (HU).

The three scheduled Innere Aspangbahn services to and from Wiener Neustadt that formerly ran via this route now run via Wien Grillgasse.

Trains from Wien towards Ebenfurth which because of engineering work on the Pottendorfer Linie are diverted over the Wampersdorf - Gramatneusiedl line also use this route. They normally use the Inzersdorf Ort avoiding line rather than the direct connection from the former station. Diverted trains towards Wien may use the new connection from Lanzendorf-Rannersdorf (AT20/27) in preference to the curve from Kledering.

This line enables trains from Ebenfurth towards Wien which are diverted over the Wampersdorf - Gramatneusiedl line to reach the Kledering - Inzersdorf Ort - Wien Meidling line at Oberlaa. This avoids the need to cross the Ostbahn on the level to use the curve from Kledering. There is a new flying junction north of Lanzendorf-Rannersdorf connecting to Abzw. Zvbf Ost, on the loop line to the Wolfsthal line from Wien Zvbf (marshalling yard), then the route goes via Abzw. Zvbf Nord and uses the flyover over the Ostbahn towards Oberlaa.

Diverted trains from Wien towards Ebenfurth generally use the direct curve to Kledering on the Inzersdorf Ort - Kledering route instead and those towards Wien may alternatively go via Kledering. Persistence may therefore be required to have both routes.

Trains normally use the Inzersdorf Ort avoiding line, but may run through the former station if the avoiding line is not available.