The line into the main station continues as a steeply-graded branch to the harbour, with a reversal en route. A tourist service with preserved railbuses has operated in the summer between the main station and a quayside platform (constructed 2012).

The service was operated by the newly formed SkinneBusGruppen Vestjylland (SBGV) in 2012 and planned to run on Mondays to Fridays from 1st July to 9th August 2013. Although the SBGV was apparently dissolved on 5 April 2014 the website says they plan to continue operation. The BjergBanen website is at present under construction.

Other seasonal services over freight lines are to be found in Danske Veterantog each year.

Some but not all Frederiksværkbanen train services continue approximately 0.5 km to the Hundested Havn station, connecting with an hourly vehicle passenger ferry to Rørvig. The Rejseplanen journey planner does know about this service, but for some reason refuses to suggest it when connecting with the ferry and instead advises a walk from Hundested. The trains can, however, be found if you explicitly select "Hundested Havn st." as an endpoint (or even, perplexingly, "Hundested Havn (færge)"). Train times can also be found on the ferry company's timetables. Note that there are seasonal variations.

This east to west curve between the main line from København and routes to Esbjerg and the German frontier, is used by IC or IC-Lyn trains between København and the Esbjerg and Sønderborg lines, not calling at Fredericia.

This connection comprises the initial phase of a future line between København and Ringsted, and part of the Kalvebod – Hvidovre Fjern freight bypass. It may be used by main line trains between København H and Høje Taastrup that do not call at Valby.

In the 2012/2013 timetable, the equivalent of the following trains were scheduled to use this line:

The compilers would appreciate any information on usage in 2016

Note that local tickets between København H and Høje Taastrup are valid on EuroCity but not on IC.

This freight line diverges east from the København H - Helsingor main line, dives under it at Nordhavn and runs parallel to the passenger tracks through Svanemollen and Ryparken before joining the Hellerup - Ny Ellebjerg S-Tog line north of Bispebjerg station. 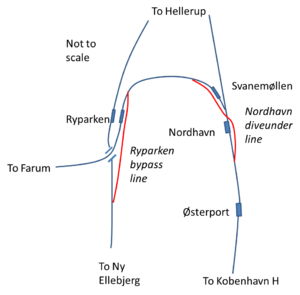 This line is used by the “Rundt om husene” (round the houses) steam specials run by Nordsjællands Jernbaneklub, which do an anti-clockwise circuit starting and finishing in København H, calling at Østerport, Nørrebro and Flintholm. They depart København H at 10:24, 11:24, 12:24 and 13:24 on the following dates in 2015: 15, 16, 22, 29, 30 August and 5, 6 September. Similar dates are expected to apply in 2016. See their Rundt om husene med Veterantoget page for details.