This list is based on the timetable dated from May 2012, unless otherwise stated. Standard abbreviations are explained in General Information.

Note: where a place name is followed by an asterisk (for example, z.p. Znam'ianka-2*), the exact name of the station or location is not known. All locations named in this version as at August 2012 are known.

A curve avoiding Zdolbuniv which is used by some long distance trains.

Only long distance trains cross the border, with bogie changing performed at Yahodyn.

A branch running east from L’viv main station. Most suburban services to the west (Khodoriv, Sambir, Mostys’ka, Shklo-Starzhys’ka), except 6013/6014 L’viv – Truskavets’ – L’viv, run to and from primys’kyi.

A west to north link between the L’viv – Stryi line and the Drohobych – Stryi line, used by fast trains to avoid Stryi. Trains to L’viv run via the separate flyover and those towards Drohobych via the shorter direct curve.

A short west to north curve avoiding Zhmerynka station. Several fast trains use it to avoid reversing at Zhmerynka station but possibly only eastbound. See also the following entry. Any travel reports would be appreciated by the Compilers.

This ca 8 km long freight avoiding line runs via a flyover at Tartak and skirts the town to reach Zhmerynka Tovarnaya (marshalling yard) and thence Zhmerynka Podol'skaya. It appears to be used only by westbound passenger services, which are allowed slightly longer timings than eastbound trains. See also the preceding entry.

It was used by the following train on 23 September 2019

Further reports would be appreciated by the Compilers.

A curve from the Korosten’ – Kyïv line to the Kyïv – Fastiv-1 line.

Note: The route taken by long distance trains is not known. 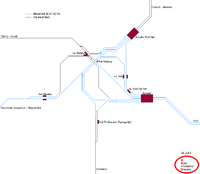 A link avoiding Koziatyn-Pas. used by some fast trains.

A south <===> east chord avoiding Fastiv-1; used by some direct trains between Koziatyn and Myronivka.

A link from the Fedorivka – Kamysh-Zoria line to the Polohy – Berdians'k line.

Only one local train each way uses this route.

This south <===> east curve is used by some long distance trains to/from the Crimea and some local trains which stop at Synel'nykove-1 en route to/from Chaplyne.

This direct north <===> south connection avoiding Lozova-Pas. is used by many long distance trains between Russia/Belarus and Crimea/Southern Ukraine not calling at Lozova.

A north <===> west curve avoiding reversal at P'iatykhatky-Pas. used by long distance trains. Note that all trains have a working stop at P’iatykhatky-Stykova to change locomotives as this is the boundary between 3 kV and 25 kV electrification.

This east <===> curve avoiding Poltava-Pivdenna is used by long distance trains between Kyïv and Kharkiv.

Kharkiv is a complex area providing a number of alternative routings. These are indicated in the map below.

Two routes exist between Shpakivka and Kharkiv area - the more northerly direct line via Zaliutyne and the more southerly and slightly longer line via z.p. Podvirky.

A chord giving access to the northern line for trains Kharkiv-Passazhirs’kyi – Zolochiv. Only two westbound local trains use this chord:

A line giving access to the northern line to Shpakivka for trains coming from Osnova. Only three westbound local trains use this line, they all come from different stations in Kharkiv and reverse in Osnova:

A line allowing trains on the the southern itinerary from Shpakivka to reach Osnova. It branches off the main line toward Novoselivka and Kharkiv-Passazhirs’kyi, southern track on the level, northern track via a flyover.

Only one eastbound local train uses the southern track:

The direct itinerary Kharkiv-Passazhirs’kyi - Osnova goes via Novozhanove and is used by most of the trains.

This line is the continuation of the previous item (UA12/25 z.p. Novoselivka - z.p. 7 km) and the same trains are using it, but it also allows trains between Nova Bavariia and Osnova to avoid Novozhanove

This north <===> south curve avoiding Slovians'k is used by some long distance trains:

This north <==> east curve to the north of Popasna enables trains to avoid the Donets’k area.

Trains between Simeykyne and Krasnodon run via either the direct west <===> east line between Post 152 km and Post 154 km or via a reversal at Simeykyne-Nove. There is only one train by each of these routes.

This south <===> west curve connects the Diakove line to the Vynohradiv line. It is used by the following train with a somewhat complex route:

Uzhhorod 2 station on the Uzhhorod – Maťovce (ŽSR) line now has advertised services. It is thought that services in the past were unadvertised workers' trains:

The following lines have few trains (relative to service levels generally in this country) - fewer than two trains each way on at least three days a week - or do not run each weekday.